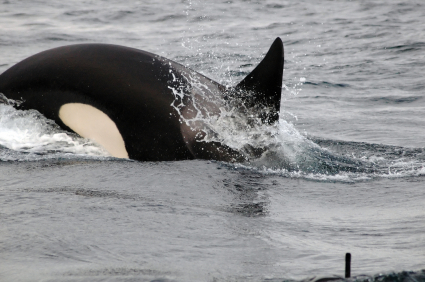 Winter weather (think rain) arrived in Southern California last week and apparently so did our beloved whales.  It seems everyone spotted a whale or two along the Palos Verdes Peninsula coastline this weekend except me.

“A pod of orcas spotted preying on common dolphin and a sea lion off the Palos Verdes Peninsula gave whale-watchers aboard the Christopher a surprise Sunday when one of them bumped the boat.”  Palos Verdes Patch reported this morning.

“The whales appeared to ‘greet’ us: all of them came over to our boat, and under us,” wrote Alisa Schulman-Janiger, who was aboard the Christopher at the time, on the American Cetacean Society – Los Angeles Chapter Facebook page. “The large male actually rushed to our boat, suddenly stopped … turned on his side, and lightly contacted the boat—with his dorsal fin partly inside the boat!”

It’s that time of year, so if you’re in Palos Verdes and would like to watch whales frolicking along our coastline there are several tour boats and miles of cliffs perfect for whale-watching.  Book a tour or select a vantage point and enjoy the show!  It’s one more lovely aspect of life on the Palos Verdes Peninsula.