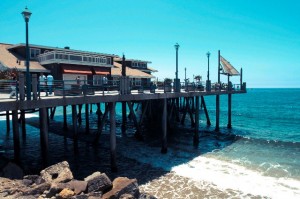 The LA Times reported on a research paper looking in to the long term changes that could occur to our local Los Angeles beaches from rising sea levels.  The paper concluded that sandy beaches may face increased erosion and that many smaller beaches may shrink to the point that tourists no longer use them.

The overall economic impact was studied for loss of tourism dollars in a meter rise of sea level and the Times article ranked “winner/loser” areas over the 100 year timescale.  For the Southbay, Manhattan Beach was expected to gain tourist money at an $8 million gain, though it suggested Redondo Beach would drop in income by $10 million.

“Using models to project how climate change would alter the width of the sand, attendance and visitor spending at 51 public beaches in Los Angeles and Orange counties, a team of researchers found some would shrink or even disappear. But others would remain relatively large.” – LA Times by Tony Barboza

“The study, published in the journal Climatic Change, was funded by the California Energy Commission and the state Dept. of Boating and Waterways, which oversees beach sand replenishment projects up and down the coast.” – LA Times by Tony Barboza

Link to the full article on the Los Angeles Times.

Link to the study.

Of course a lot can change in one hundred years, but it is an interesting read.

PalosVerdesLifestyle– Nominated by Relocation.com as one of the top ten Los Angeles area real estate blogs. Chosen by MovingCost.com as one of the best Los Angeles realty blogs. Awarded 5 out of 5 stars by Lender411 blog review.  Ranked by Technorati in the top 1% of all blogs. As seen in the Daily Breeze newspaper.

South Bay Los Angeles cities I sell real estate, property, houses and homes in: Palos Verdes Estates, Rolling Hills, Rolling Hills Estates, Rancho Palos Verdes, San Pedro, Long Beach, Torrance, Lomita, Redondo Beach, Hermosa Beach and Manhattan Beach. Based on information from the Association of REALTORS®/Multiple Listing as of the initial date of this article/blog publication and /or other sources. Display of MLS data is deemed reliable but is not guaranteed accurate by the MLS. The Broker/Agent providing the information contained herein may or may not have been the Listing and/or Selling Agent.